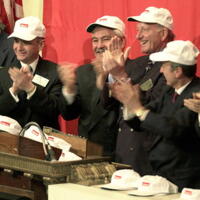 Philippe Foriel-Destezet Net Worth: Philippe Foriel-Desrezet is a French entrepreneur who has a net worth of $2.8 billion. Born in 1936, he made his fortune as founder of Ecco, an employment company. Having a master's degree of Business Administration from Ecole des Hautes Etudes Commerciales, a prestigious School of Management in Paris, Foriel-Desrezet founded his company in 1964. During the 80s, his company became France's leading supplier of personnel. Later, he merged Ecco with Adia Interim, Klaus Jacob's Swiss employment agency, with the intention of creating Adecco in 1996. Foriel-Desrezet served as Co-Chairman until 2005 when he stepped down, and the next year, he was appointed an Honorary President. Currently, Adecco holds 5,500 branches with over 33,000 employees in more than 60 countries. Moreover, Foriel-Desrezet is the Chairman of Akila Finance, a Luxembourg-based holding company, and Securitas. He was also awarded the French Legion of Honor as a native of France.