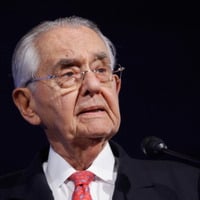 Peter Peterson Net Worth: Peter Peterson is an American businessman, fiscal conservative, investment banker, philanthropist and author who has a net worth of $1.7 billion. Known to many as a former United States Secretary of Commerce, Peter Peterson is now focused on raising awareness about U.S. fiscal-sustainability issues through his Peter G. Peterson foundation. He set up the foundation with a $1 billion endowment in 2008, right after he sold the bulk of his shares in The Blackstone Group and thus generated $1.85 billion before taxes. Born Peter George Peterson on June 5, 1926, in Kearney, Nebraska, he was raised by poor Greek immigrants who came to the States with few pennies in their pockets. However, they still saved enough to send their children to college. Thus, Peterson (MIT dropout) went on to take Bachelor's degree from Northwestern University and M.B.A. degree from the University of Chicago Booth School of Business. He held a great variety of positions before he decided to co-found Blackstone with fellow billionaire Stephen Schwarzman in 1985. Later on, he spent some time serving as chairman of Lehman Brothers (1973 -1984), Commerce Secretary under President Nixon (1972 –1973), as well as the head of the Federal Reserve Bank of New York (2000-2004). Peter Peterson has also penned a number of books, including an autobiography. As of August 4, 2010, he has agreed to give at least half of his wealth to charity by signing "The Giving Pledge." Currently married to Sesame Street creator – Joan Ganz Cooney, he has managed to found marital bliss after two unsuccessful marriages.