Patrice Motsepe net worth: Patrice Motsepe is a South African mining magnate who has a net worth of $2.7 billion. Patrice Motsepe founded and now chairs African Rainbow Minerals (ARM), a publicly traded mining conglomerate with interests in platinum, nickel, chrome, iron, manganese, coal, copper and gold. Even though his Johannesburg-based company has gone through hardships such as labor disputes, violence and subsequent production losses, Patrice Motsepe's fortune didn't stop to grow; all thanks to the shares he holds in Harmony Gold, via ARM.

Apart from being a shareholder in the company, Patrice serves as CEO of a company called Harmony, which specializes in turning old digs into new digs. Among his other business responsibilities include being Deputy Chairman of Sanlam, South Africa's leading financial services groups, as well as the President of Business Unity South Africa (BUSA), which is the voice of organized business in South Africa. Born to liquor-selling father, Patrice decided to stay away from his father's shop, attending college and thus becoming a lawyer. Holding both a BA and LLB degree, Patrice was the first black partner at the Bowman Gilfillan law firm in Johannesburg, after which he eventually shifted to the mining industry. He bought low-producing gold mine shafts in 1994, and by using a lean management style, he turned the mines into a profitable business. Plus, he profited from South Africa's Black Economic Empowerment (BEE) laws, according to which companies need to be at least 26% black-owned in order to get a government mining license. Furthermore, he has been the President and Owner of the Mamelodi Sundowns Football Club ever since 2003. As of late, he joined The Giving Pledge and made an announcement that he would give half his wealth to charities. Apart from all roles listed above, Patrice Motsepe also acts those of a husband and father of three. 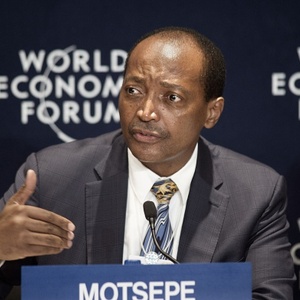