Omid Kordestani Net Worth: Omid Kordestani s an Iranian-American businessman who works as senior advisor to the Office of the CEO and Founders at Google who has a net worth of $1.9 billion dollars. Omid Kordestani was born in 1963 n in Tehran, Iran and attended Andisheh Don Bosco School, an Italian Catholic school in Tehran that emphasized education and language skills He moved to San Jose, California at the age of 14.

He graduated with an electrical engineering degree from San Jose State University and went to work for Hewlett Packard as an engineer. Several years later in order to pursue a business degree, he entered Stanford Business School and earned his MBA in 1991. Kordestani has more than a dozen years of high-technology consumer and enterprise experience, including key positions at Internet pioneer Netscape Communications. He joined Google in May 1999, leading the development and implementation of the company's initial business model. He played a part in Google's worldwide revenue generation efforts as well as the day-to-day operations of the company's sales organization. In the May 8, 2006 issue of Time Magazine, Kordestani was named one of Time's "100 People who shape our world" He was Google's senior vice president of worldwide sales and field operations until April 16, 2009. 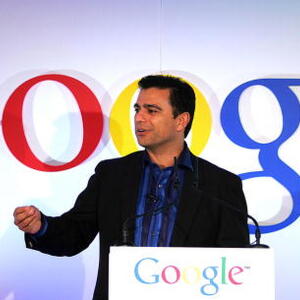