Nobutada Saji Net Worth: Nobutada Saji is a Japanese businessman who has a net worth of $1.4 billion. Belonging to the third generation to run the family drinks business Suntory Ltd, Saji is the chief executive of Japan's fourth-largest brewer and food manufacturer. A graduate of the Keio University, Saji went to earn his MBA degree at the UCLA Anderson School of Management. The grandson of Suntory's founder, Shinjiro Torii, he landed the President post at the family-owned Suntory brewing, distilling and drinks group in 2001. Ever since he took control of the company, Saji focused Suntory on overseas acquisitions. Among the biggest include the 2009 acquisition of France's Orangina Schweppes Group and New Zealand's Frucor Beverages Group. One year later, Saji made attempts to merge with rival Kirin Holdings, but the deal has never come to fruition. In addition to the above, Saji heads the Advertising Council of Japan and he runs a major gallery in Tokyo. Also an avid swimmer and fitness devotee, he operates a chain of gyms in the country. Most recently, he intends to IPO the company's non-alcoholic drinks and food business, hoping to potentially raise more than $3 billion. 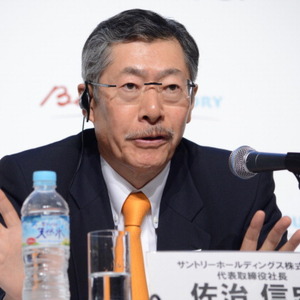