Nicholas II of Russia Net Worth

Nikolai Alexandrovich Romanov (May 18, 1868 – July, 17 1918) was officially titled, Nicholas II, Emperor and Autocrat of All the Russians, and was commonly known by the monarchical title Tsar. The eldest son of Emperor Alexander III, he was educated by highly-qualified private tutors and joined the army at the age of nineteen. In his three-year stint in the army, he reached the rank of colonel.

He succeeded the Russian throne from his father on October 20, 1894 following his father's death. During his reign, he saw Imperial Russia transform from being one of the foremost great powers of the world to economic and military collapse. As for his foreign policy, Romanov's main objective was to maintain the status quo in Europe. One of the successfully completed projects in his time is the construction of the Trans-Siberian railroad, which still remains the largest railway in the world.

H earned the tag Bloody Nicholas because of disasters like the Khodynka Tragedy, a human stampede that occurred after the festivities of Romanov's coronation which resulted in the deaths of 1,389 people. There was also a day known as Bloody Sunday when Russian troops opened fire on demonstrators asking for better working conditions, more than a thousand people were killed in the process.

Nicholas II created an elected legislature, Duma, and stepped down from the monarchy. On March 15, 1917, he abdicated the throne, after which he and his family were taken to the Ural Mountains and placed under house arrest. After the provisional government was overthrown by the Bolsheviks, Nicholas II and his family were murdered by the ruling Bolsheviks led by Vladimir Lenin. Married to Princess Alix of Hesse-Darmstadt of Germany, he was a father of five children; Olga, Tatiana, Marie, Anastasia, & Alexei. 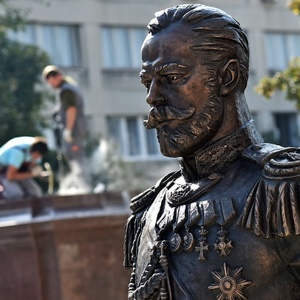