Nandan Nilekani Net Worth: Nandan Nilekani is an Indian entrepreneur who has a net worth of $1.3 billion. Mr. Nilekani initially started generating his wealth as cofounder and former CEO of Infosys, India's third largest IT company (by revenues), which provides business consulting, technology, engineering and outsourcing services. Now, he continues to grow his fortune as Chairman of the Unique Identification Authority of India (UIDAI), with most recent plans to fully dedicate to politics, i,e, he intends to run for the 2014 federal elections on a Congress Party ticket.

It was some four years ago when he joined the government to become head of the Unique Identification Authority of India, which has issued 415 million online IDs to Indian residents to date. The IDs in question have been also used to make direct cash transfers of various government entitlements, among other users. His wife, Rohini Nilekani, is an active charity supporter and she even sold some Infosys shares in August in order to raise $26 million meant for donations in water supply and education. Nandan and Rohini have two children and they currently reside in Delhi, India. 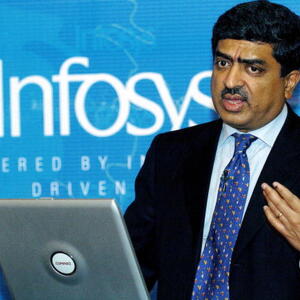