N.R. Narayana Murthy Net Worth: N.R. Narayana Murthy is an Indian businessman who has a net worth of $1.6 billion. Narayana Murthy established himself as an IT industrialist, best known as the co-founder of Infosys, a multinational provider of business consulting, technology, engineering, and outsourcing services. Born Nagavara Ramarao Narayana Murthy on August 20, 1946 in Mysore, Karnataka, India, he acquired his knowledge in electrical engineering at the National Institute of Engineering, University of Mysore, and then at M.

Tech at the Indian Institute of Technology Kanpur. Before setting up Infosys, Murthy got the chance to work at the Indian Institute of Management Ahmedabad as chief systems programmer and Patni Computer Systems in Pune (Maharashtra). It was in 1981 that he founded Infosys and served as its CEO until 2002 when he became a chairman. He held that post until 2011 and then made a two year hiatus before getting back as Infosys' executive chairman last June. The reason for his comeback is his intention to restore the $7.3 billion (revenues) company to its old glory. Dubbed the father of Indian IT, he now leads the company along with his son Rohan, who holds a Ph.D. in computer science from Harvard. 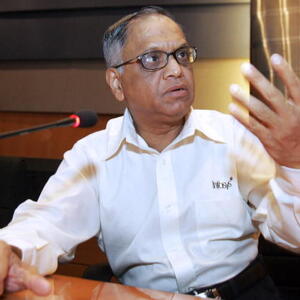