Mikhail Fridman Net Worth: Mikhail Fridman is a Russian businessman who has a net worth of $15 billion. Born Mikhail Maratovich Fridman in Lviv, Ukraine, in 1964, Mikhail Fridman studied at the Moscow Institute of Steel and Alloys. To pay his bills during the '80s, Fridman began scalping tickets, which led to an interest in trading and investing. He went on to create the Alfa Group Consortium in 1989 and is currently the Chairman of the Supervisory Board of the company. Fridman built the business into one of the biggest private investment firms in all of Russia. In 2014, "Forbes" pegged him as the second wealthiest person in Russia. He is also a board member on the Council of Foreign Relations and belongs to the Public Chamber of Russia. Fridman is very active in his home country's political sphere and is particularly interested in Judaism around Europe. He worked with the Russian Jewish Congress during the mid-'90s and frequently donates to the European Jewish Fund. He is a co-founder of the Genesis Philanthropy Group, an organization that hopes to support Russian Jews around the world. He earned the GQ Man of the Year National Award in 2006 and, two years earlier, was placed on "Fortune" magazine's list of the Power 25 in Europe. In 2005, he was involved in a controversy after buying a government-owned home for well below market value. Several Russian courts ruled that Fridman had to return the house to state control.

Net Worth details: Mikhail Fridman is the largest shareholder of Alfa Group which he created and controls with two other partners. Fridman sold his stake in oil producer TNK-BP International for $5.1 billion in 2013 after collecting $38 billion in dividends since 2004. He also owns 32.9 percent of Alfa Bank. Fridman and his partner purchased German RWE's Dea unit for $5.8 billion. He owns stakes in multiple other companies including Uber Technologies. 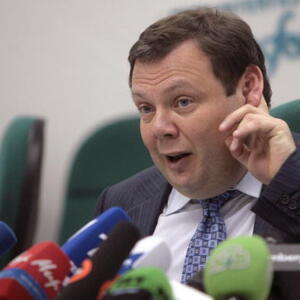