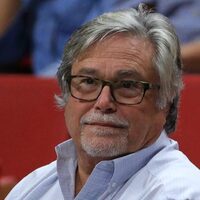 Micky Arison Net Worth: Micky Arison is an American businessman who has a net worth of $5.5 billion. Micky Arison's wealth makes him the richest person in Florida. He is perhaps best known for acting as the chairman of the Carnival Corporation, which is the largest cruise ship company in the world. In addition, Micky is known by many sports fans as the owner of the Miami Heat, a basketball team that plays in the NBA. Since taking control of the Miami Heat in 1995, the team has won three championships.

Early Life and Family: Micky Arison was born on June 29th of 1949 in Tel Aviv, Israel. As a young child, Micky emigrated to the United States with his father, Ted Arisen. Ted had previously fought in the Israeli army, and he subsequently spent ten years working in the air cargo business after arriving in the United States. After moving with his father to Miami in 1966, Micky attended the University of Miami.

During this period, Ted connected with Knut Kloster, a cruise ship executive from Norway. Together, they formed Norwegian Caribbean Lines with just one ship. Knut and Ted revolutionized the cruise industry, targeting middle America with short, affordable Caribbean cruises and placing an emphasis on the ships themselves rather than the destinations.

By 1971, Ted Arison became involved in a vicious lawsuit with Knut Kloster after the Norwegian backed out of his contract. Kloster had failed to receive the agreed-upon amount of $1.5 million in profits. During the height of the resulting lawsuit, Arison seized a significant amount of money from the company and used it to set up a new cruise line called Carnival. At this point, Micky Arison dropped out of college in order to help his father with this new business venture, initially taking a job as a sales rep.

Ted would later bring the Heat (an NBA franchise) to Miami in 1988. He also renounced his US citizenship to avoid estate taxes, returning to Israel in 1990 to live out the rest of his years. Unfortunately, his death came 9 months short of a required ten-year absence from the States, and he was unable to actually benefit financially from this tax loophole.

Career: During his time working at Carnival, Micky witnessed a number of ups and downs. While working under his father, Micky had to struggle to overcome a wide range of obstacles as Carnival dealt with a number of financial difficulties. The decision to focus on a "fun" atmosphere on Carnival boats was seen as innovative at the time, but it was later revealed to be a purely financial decision. Installing casinos on the ships allowed Micky and his father to maximize profits.

By this point, Micky had risen rapidly through the ranks from sales rep to reservations manager and finally vice president. In 1979, Ted made Micky the new CEO of Carnival Corp. at the age of 30. Ted then resigned to become chairman of the board and let his son take over.

By 1985, the company was starting to become stable, and in 1989 gross revenues exceeded $1 billion. These profits were due in large part to desperate measures, such as forcing employees to work 70 hours a week for less than the minimum wage – with no benefits. In 1990, Carnival stocks plummeted to $13 a share when they had been previously trading at $25 a share. By 1992, profits had risen once again.

During his reign, Micky has overseen the acquisition of many other cruise lines – a strategy put in place by his father before him. In 1992, Carnival acquired Seabourn, and Arisen followed up by purchasing Airtours, Costa Crociere, Cunard Line, and others.

Salary: In 2009, it was reported that Micky earned about $7.2 million, which included a base salary of $880,000 and a cash bonus of around $2.2 million. That year, he was also granted stocks worth approximately $3.6 million. With other miscellaneous compensation of about $500,00, this leaves us with his total salary in 2009.

Controversy: In 2012, Arison courted controversy for what some considered his failure to take responsibility for the infamous "Concordia cruise ship disaster," in which 32 people lost their lives after the Costa Concordia (a Carnival cruise ship) hit a reef and ran aground. Arison failed to make any kind of public appearance in the immediate wake of the disaster, despite being the owner of the cruise line. Many in the media and those connected to the disaster felt his behavior was callous and insensitive.

Carnival Losses During 2020 Pandemic: In 2020, it was announced that Carnival had lost $4.4 billion as a result of the 2020 pandemic. The coronavirus heavily impacted the cruise industry, and one has to assume that Micky's net worth suffered as a result. Carnival's financial woes included $2 billion in losses after selling off a number of its cruise ships for a discounted price. In addition, Carnival posted revenue that was down 85% from the same period in 2019.

In an official statement, the cruise company also predicted that it would lose $650 million per month for the duration of the lockdown. With no end to the pandemic scare in sight, this did not bode well for Carnival. In addition, the company was excluded from the US Federal stimulus package intended to assist American businesses. This is because Carnival is headquartered overseas to avoid federal income taxes, and it is technically not an American company.

Real Estate: In 2020, the Arisen family sold an apartment tower in Miami for $81 million. This came at a time when the family was losing money due to Carnival's struggles at the height of the pandemic, and they were presumably selling off assets to cover their losses. There were 275 units in the tower, which equates to an average price of about $295,000 per unit.