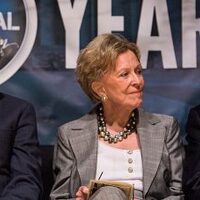 Martha Ingram net worth: Martha Ingram is an American businesswoman who has a net worth of $3.9 billion dollars which makes her one of the richest people in Tennessee. Born in Charleston, South Carolina, Martha Ingram graduated from Vassar College in the late 50s with a degree in History. After relocating to Nashville, Tennessee with her husband in the 60s, she became instrumental in developing the Nashville art scene. She developed the Tennessee Performing Arts Center and the Schermerhorn Symphony Center. She was also appointed to the advisory board of the Kennedy Center. She began working as the Director of Public Affairs for her husband's company, Ingram Industries in 1979. After her husband passed away in 1995, she became Chairman. The company has since sprouted multiple arms, some public, and some private, including an entertainment division, a publishing division, a marine division, and an insurance group. She is also heavily involved in philanthropic work, and was the former Chairman of the Vanderbilt University Board of Trust. She stepped down as Chairman of Ingram in 2008.