Martha Firestone Ford net worth: Martha Firestone Ford is an American businesswoman who has a net worth of $800 million. Martha Ford was married to Henry Ford's grandson, William Clay Ford, from 1947 until his death in 2014. But not all of her wealth came from marriage. Her paternal grandfather was Firestone and Rubber Company founder Harvey Firestone.

Martha Firestone was born in Akron, Ohio in September 1925. She is the principal owner and chairwoman of the National Football League's Detroit Lions. She is also on the board of the Henry Ford Health System.

She has four children including William Clay Ford, Jr. Martha Firestone Ford graduated from Vassar College. Her late husband William was the sole owner of the Lions after buying out all the other owners in 1963. The couple met in New York and he was a grandson of Henry Ford. She resides in Grosse Pointe Shores, Michigan in a house built on Lake St. Clair. 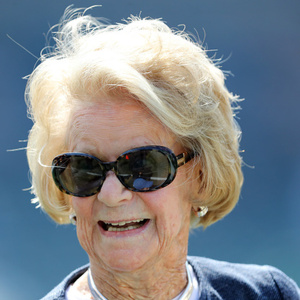