Mark Stevens Net Worth: Mark Stevens is an American venture capitalist who has a net worth of $2.3 billion. Mark Stevens has spent the last two decades accumulating stakes in some of Silicon Valley's top tech companies as a venture capitalist at Sequoia Capital. Some of his largest and most notable investment wins include Google and LinkedIn. A California-native, Stevens graduated from the University of Southern California, obtaining a Bachelor of Science and master's degree. In 1982, he joined Intel Corporation. Seven years later, he became a partner at Sequoia Capital and began to invest all of his talent in various software systems and other investments of the kind. Eventually, Stevens joined the category of top venture capitalists. At the moment, he is one of the five voting partners at Sequoia Capital and is therefore responsible for the most important high tech investments in companies like Google, NVIDIA and YouTube. In 2004, Mark Stevens and his wife donated $22 million to the University of Southern California. The donation created USC's Stevens Center of Innovation which aims to develop creative thinking ad research for maximum societal impact. Mark Stevens is also a member of the USC Viterbi School of Engineering Board of Councilors and the USC Board of Trustees. In 2015 he donated $50 million to USC to create the Mark and Mary Stevens Neuroimaging and Informatics Institute.

Golden State Warriors: Mark is a minority owner in the Golden State Warriors NBA franchise. Current majority owner Jacob Lacob led a group of investors to buy the team in 2010 for $450 million. Stevens bought his minority stake in the summer of 2013 when the team was worth $800 million. In 2017 the team was valued at $2.5 billion. In 2019 the team was valued at $3.5 billion. If one were to assume bought 5% of the team (the typical minority stake percentage) in 2013 for $40 million, at the $3.5 billion valuation his stake would be worth $180 million, a 4.5X return.

Mark Stevens earned a level of notoriety on June 5, 2019 thanks to an altercation with Toronto Raptors player Kyle Lowry. During game 3 of the NBA Finals, Lowry fell into the stands. After falling, Mark shoved Kyle. Mark was subsequently removed from the game and banned from attending the remaining NBA Finals series. In the days that followed Mark was fined $500,000 and banned from attending NBA games for a year. 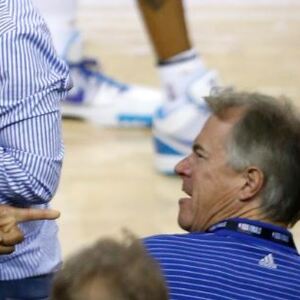