Mario Moretti Polegato Net Worth: Mario Moretti Polegato is an Italian businessman who has a net worth of $2.4 billion. He secured a place for himself in the billionaire circles thanks to his active involvement in the footwear industry. Actually, he rose to riches as founder and chairman of the Geox Group, known for using waterproof/breathable fabrics.

It was in 1995 that Polegato patented his "breathable shoe" technology with the formation of shoemaker Geox. Over the years, the company grew and today it offers a wide span of products ranging from footwear for men, women and children to all kinds of apparel. Nowadays, the company makes distributions to high-end retailers and has numerous company-owned stores in large markets. However, it couldn't avoid the impact of Europe's weak economy and Geox saw its net sales drop 9% to $913 million (702 million euros) in the first nine months of 2012. Still, by the end of 2012, the company expanded by opening new stores in Moscow, Hong Kong and three mainland Chinese. The father of shoes who breathe, Mario Moretti Polegato became a recipient of Ernst Entrepreneur of the Year award in 2002, and the next year he was again named by Ernst and Young as the Best Italian Entrepreneur. He received one more accolade in 2010 when CNBC and The Financial Times selected him to become the recipient of European Business Leader Award (Ebla) for the Innovator of the Year category. 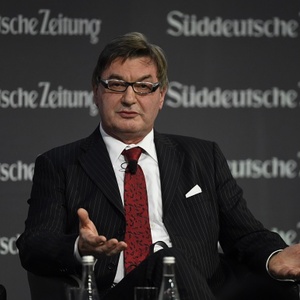