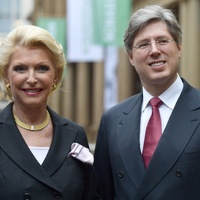 Maria-Elisabeth & Georg Schaeffler Net Worth: Maria-Elisabeth & Georg Schaeffler are mother-and-son business personalities who have a net worth of $14 billion. Maria Elisabeth along with her son Georg Schaeffler own one of world's largest producers of roller bearings for automotive, aerospace and industrial uses, the Schaeffler Group. Maria took the helm of the company in 1996 right after her husband's death. Having practiced international business law in Dallas, Maria's son Georg started to help his mother run the company in 2009. In the meantime, i.e., in 2008, the company revealed its $15 billion acquisition of Continental AG, one of Europe's largest tire and auto parts maker. But only one year later, the Schaeffler Group restructured the $16 billion debt incurred due to the takeover and currently owns a 36% stake in Continental.

Net Worth details: The Schaefflers hold an 80 percent stake in the company Schaeffler which controls interests in Schaeffler AG and Continental. The German manufacturer of automotive supplies including ball bearings had revenue of $14.7 billion in 2015. Schaeffler and his mother purchased a majority of auto parts maker Continental for $17 billion in 2008, and he controls 36.8 percent. He also holds about 80 percent of the common shares of Schaeffler AG.