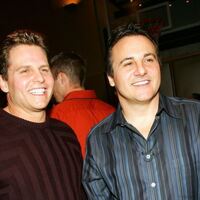 Maloof Brothers Net Worth: Maloof Brothers are part of the prominent Las Vegas, Nevada family of business property owners who have a net worth of $1 billion dollars. The origin of the family name is 'Maalouf' and of Lebanese descent. Originally transplanted to New Mexico, the Maloof's success began with the distributing rights of Coors Beer in the Southwest U.S. in 1937. The Maloofs were also the owners of the Sacramento Kings (professional basketball team) 1998-2013. The family consists of George J. Maloof, Sr., his wife Colleen and their children: Adrienne Maloof-Nassif and her brothers Joe, Gavin, George Jr., and Phil. When George, Sr. passed away at the age of 57, his wife Colleen assumed control of the entire Maloof operation. Rather than selling off the company assets, she teamed up with her five children. Under Colleen Maloof, the family expanded their beer and liquor distribution operations and later opened their first gaming property in 1992. From 1990 to 1992 the family also owned the Birmingham Fire of the World League of American Football. In the 100-plus years that define the Maloof Companies, customer service and a strong work ethic combined with energy and vision are the bragging points that built this one-time general store into a business model for diversified success. In 2008, brothers Joe and Gavin Maloof founded the Maloof Money Cup, a competition for both professional and amateur skateboarders. The competition is held within U.S. events of the U.S. Pro Men's and Women's Street Championships, the U.S. Pro Vert Championships, and the Maloof Money Cup AM Championships. A spring New York date and an autumn South Africa date (entitled the Maloof Money Cup World Skateboarding Championships).