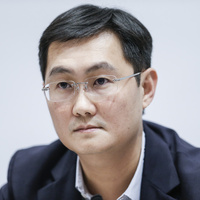 Pony Ma Huateng net worth: Pony Ma Huateng is a Chinese internet entrepreneur who has a net worth of $36 billion. Ma Huateng, nicknamed "Pony," is the founder, president, chief executive officer, and executive board member of Tencent Holdings, Ltd., one of the most significant telecommunications companies in China. Ma's work at Tencent made him one of the richest people in the world.

Born in 1971, Huateng is a native of Chaoyang, Guangdong province and a graduate from the Computer Science Department of Shenzhen University. After he earned his B.S. in software engineering in 1993, he joined China Motion Telecom Development, Ltd., where he worked on the Internet paging system development. Then Huateng went on to work for Shenzhen Runxun Communications Co., Ltd., where again he was engaged in research and development. Ma and four of his friends founded Tencent in 1998. One year later, the company launched the product named Tencent QQ, which became very popular in China and brought success and wealth to the company. Tencent soon expanded to become the largest instant communication service network in China. Along with its expansion, Tencent added more employees and eventually Ma was named chief executive officer, executive board member, and chairman of the board. Tencent grew in popularity quite quickly, fueled by its popular instant messaging service, Tencent QQ, and by the introduction of such popular online multi-player games as, "League of Legends". Billed as "the Chinese AOL", Tencent now encompasses web portals, e-commerce, and multiple social networks as well. As of 2005, he was the 68th richest person in China, and Time Magazine had recognized him for his impact on the economic and technological landscape of China. Though Tencent has remained quite popular, its value has fluctuated over the years, and for the last few years, it has been on the decline. He currently serves the Chairman of Tencent, and is based in Shenzhen. Ma Huateng's net worth makes him one of the richest internet entrepreneurs of all time!

Net Worth details: Pony Ma holds a 7.7 percent stake in the operator of China's largest instant-messaging service, Tencent Holdings. His stake is controlled through Advanced Data Services. Ma donated $2.3 billion worth of Tencent shares to a charitable foundation in 2016. He has $150 million of Hong Kong property as well as a painting purchased in 2013 at a charity event. In 2016 Tencent Holdings reported revenue of $16.4 billion.