M.A. Yusuff Ali Net Worth: M.A. Yusuff Ali is an Indian businessman who has a net worth of $5 billion. Mr. Ali entered the billionaire ranks as the Managing Director of Abu Dhabi-headquartered EMKE LuLu Group of companies, which has the Middle East-based Lulu Hypermarket chain in its possession.

The group reportedly makes annual turnover of US$ 4.5 billion globally and employs the largest number of Indians outside India. Born on November 15, 1955, in a small Indian village, M.A.Yusuff Ali migrated to Abu Dhabi in the 1970s to join his uncle's business, i.e., the EMKE Group of companies. A holder of a diploma in Business Management & Administration, Yusuff Ali opened his first Lulu Hypermarket in 1990s, a period when the traditional groceries and supermarkets were replaced by large neighborhood stores and hypermarkets. Today, LuLu Group International makes $5 billion (revenues) and has more than 100 retail outlets in the Middle East, Africa and India. With plans to expand to India further by opening its first mall there, the Lulu Group also broadens its interests in fields like healthcare, software, and infrastructure with operations in 21 countries. Aside from Lulu, M.A. Yusuff Ali owns two Marriot Hotels and a Grand Hyatt Hotel. He made the headlines recently with his bid to buy a minority stake in the Catholic Syrian Bank. 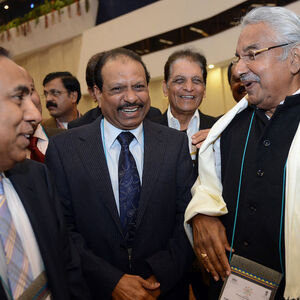