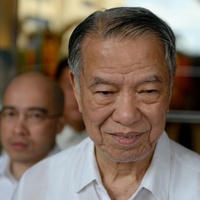 Lucio Tan net worth: Lucio Tan is a Chinese Filipino businessman who has a net worth of $5.8 billion. Lucio Tan is one of the richest people in the Philippines. Mr. Tan holds interests in approximately 300 companies with operations in various industries including banking, airline, liquor, tobacco and real estate. Among the most notable firms, where he is a majority shareholder, are Asia Brewery, the second largest brewery in the Philippines, Tanduay Holdings, one of the world's largest rum makers, as well as Fortune Tobacco, the largest tobacco company in the country. Although he was a non-smoker, Lucio started a cigarette company called Fortune Tobacco in 1966. This business endeavor, that was placed in a small shack in Marikina, turned out to be a true success. From this flagship company emerged numerous successful ventures that would bring Mr. Tan to enormous fortune. No one has ever thought that the young chemical engineering student who mopped floors to pay for school would become such an affluent man in his country. He actually quit before graduating in order to take a job in a tobacco factory, where he probably got the idea to found his own venture Fortune Tobacco. Married with six children, Lucio Tan now spends his free time with his family or flying helicopters.