Consequently, shares in flagship Sany Heavy Industry (a construction equipment maker) plummeted 45% in 2012, together with its Hong Kong-listed coal mining equipment arm, which also went down. In September the same year, Sany Group suffered a public relations embarrassment, being rejected by the U.S. to build a wind farm next to a U.S. military base in Oregon. But opposite to the U.S. impediment, Sany teamed up with CITIC Private Equity Advisors of China to purchase Putzmeister of Germany, one of the world's largest concrete pump manufacturers, earlier that year. All in all, Liang Wengen has been dedicated to cultivate Sany Group into one of the world's largest concrete machinery producers, today taking up 50% shares in Chinese market thanks to their highly competitive products. Furthermore, Sany's rotary drilling rig and crawler crane have developed into domestic first-class brands. 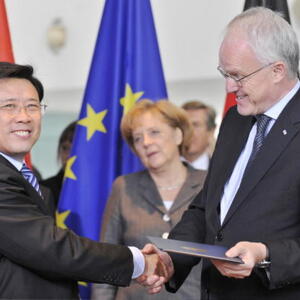