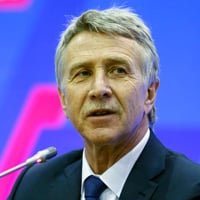 Born in Kaspiysk, Russian SFSR, Leonid Mikhelson attended the Kulbyshev Civil Engineering Institute in the late 70s, where he majored in Civil Engineering. He worked as a foreman, initially, and then became a chief engineer for such projects as Ryazantruboprovodstroy Trust. From there, he moved on to head the Kuybyshevtruboprovodstroy Trust. In the late 80s, he began to work for Novafininvest. He eventually took over as manager for the company. He renamed the company, Novatek, and shepherded it through a massive restructuring that included adding oil and gas production to its pipeline and roadwork divisions. The company grew exponentially. He has since sold 20% of the company, but still holds a majority stake, and continues to serve as CEO. In addition to his duties with Novatek, he also owns nearly 75% of Samara-JSC, a large bank that was formed in 2006.

Net Worth details: As of this writing Leonid Mikhelson owns a 25 percent stake in the Russian gas company Novatek, which produces 11 percent of the country's gas. He purchased a controlling stake in chemical company Sibur in 2010 and 2011 from Gazprombank and now owns a 34.2 percent stake. He is also a 3.3 percent owner of Promsvyazbank. Mikhelson owns artwork by Christopher Wool, Gerhard Richter, and Olafur Eliasson.