Len Blavatnik net worth: Len Blavatnik is a Ukrainian-American businessman who has a net worth of $32 billion. Len Blavatnik earned his net worth through his business investments in coal, oil, real estate and more, as well as serving on the board of many companies and Universities. Leonard Valentinovich Blavatnik was born in London, United Kingdom in June 1957. Len attended Moscow State University and came to the United States in 1978. He got a masters in computer science at Columbia University and his MBA at Harvard Business School in 1989. Len founded Access Industries in 1986. In 2005 Access Industries bought Basell Polyolefins for $5.7 billion. Basell acquired Lyondell Chemical Company in 2007 and LyondellBasell Industries had become the third largest chemical company in the world. Blavatnik sued JPMorgan Chase in 2010 after he lost $100 million following their advice. Chase had to pay Blavatnik $50 million in 2013. Len Blavatnik sits on the board and has interests in the world's largest aluminum producer UC Rusal. Access Industries acquired Warner Music Group in 2011 for $3.3 billion. The Blavatnik School of Government was formed at the University of Oxford in 2012 as a result of his donation of $75 million Euros. He also donated $50 million to Harvard. Blavatnik was listed in 2017 as the fourth wealthiest person in the United Kingdom. He has four children and is married to Emily Appelson Blavatnik.

Net Worth details: Len Blavatnik holds a 19 percent stake in chemical company LyondellBasell which is based in Houston, Texas. He is also a minority owner in Russia's largest producer of aluminum, United Co. Rusal. Blavatnik earned nearly $5 billion in dividends from Russian oil companies, and sold 12.5 percent of TNK-BP for $7 billion in 2013. In 2011 he purchased Warner Music Group for $3.3 billion. His real estate and art collection are valued at $1.7 billion. 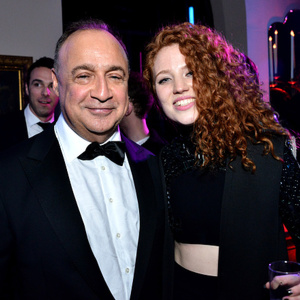