Lee Myung-Hee Net Worth: Lee Myung-Hee is a South Korean businesswoman who has a net worth of $1.6 billion. Considered to be the wealthiest woman in South Korea, Lee Myung-Hee is the current Chairman of the retail giant Shinsegae. Daughter of Lee Byung-Chul, Samsung's late founder, she started her career at the tech giant once she graduated from Ihwa Womens" University.

Actually, even the department store franchise that she chairs today was under Samsung's umbrella for four decades. Founded in the mid-1950s, Shinsegae separated from the group in the early 1990s along with the Hansol Group, Saehan Group and CJ Group. Moreover, Shinsegae spun off its discount chain, E-mart, some two years ago, but Myung-Hee still has 17.3% in her possession. Most recently, Shinsegae took over the Seoul Express Bus Terminal, and also announced some other long-term development plans. Married with two children, Lee Myung-Hee's husband Chung Jae-Eun, Shinsegae was a Shinsegae's honorary chairman until he gave his shares to their children in 2006 and paid $350 million donation tax. 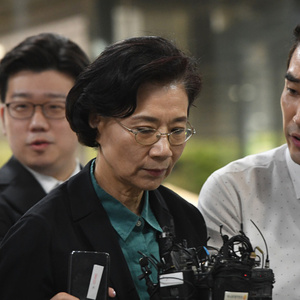