Lakshmi Mittal net worth: Lakshmi Mittal is chairman and CEO of the world's largest steel making company ArcelorMittal who has a net worth of $18 billion. Lakshmi Mittal was born into a wealthy Indian steel family. Mittal started his career in India by working in the family steelmaking business. That net worth makes him one of the richest people in India. At one point when his net worth topped $40 billion, he was the richest person in Asia and the United Kingdom. At his peak he was the second richest person in Europe and the 21st richest person in the entire world. Mittal made his fortune in the steel business, having entered into the family steel business from a young age. After a significant falling out with this parents, however, Mittal started his own steel business in Indonesia, which eventually became Arcelor Mittal, the company he made into one of the most successful in the world. Mittal was a pioneer in the development of integrated mini-mills and the use of "DRI" (direct reduced iron) used as a as a scrap substitute for steelmaking. Mittal led the consolidation process of the global steel industry and was named one of the "100 Most Influential People" by Time magazine in May 2007.

Mittal's company has not been free from controversy, however, with many accusing him of exploiting "slave labor" conditions in his mines around the world. Between 2004 and 2007, his mines in Kazakhstan were responsible for the deaths of a total of 91 coalminers. Mittal has been involved in several other controversies involving political corruption and the working conditions through which he has accumulated his vast wealth. He is also known for his philanthropy, in particular his funding of a program to support Indian athletes in the Olympics following his disappointment in India's showing.

Lakshmi Mittal Net Worth details: Lakshmi Mittal owns a 37 percent stake in the world's largest steel producer ArcelorMittal. In 2004 he paid himself $2 billion worth of dividends from LNM Holdings. Mittal purchased International Steel Group in 2004 and acquired Arcelor in 2006 for $38.3 billion. In 2016 he purchased 472 million shares of ArcelorMittal. He owns three mansions on "Billionaire's Row" in London which he spent more than $470 million for. Mittal also owns 41 percent of stainless steel maker Aperam. 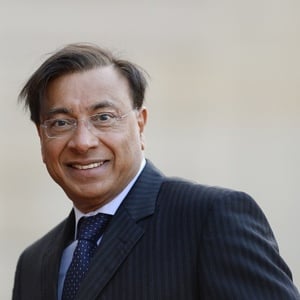