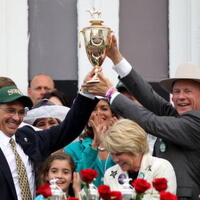 Kenny Troutt net worth: Kenny Troutt is a self- made billionaire and the founder and former CEO of Excel Communications who has a net worth of $1.2 billion. Kenny Troutt has earned his net worth through his founding of Excel Communications (a long distance communication system) in 1988. Excel became the fourth largest long distance carrier in the United States. In 1997 he expanded his business further by purchasing the Telco Communications Group. After selling Excel Communications to Teleglobe, Troutt earned his spot to the Forbes List of Billionaires. In 1999 he decided to turn his interest to horses, and later purchased Prestonwood Farm, which he later changed to Winstar Farm. He is a trustee of TOBA (Thoroughbred Owners and Breeders Association,) as well as being on the board of directors for the Breeders Cup. He is the owner of Super Saver, the horse that won the 136th race at the Kentucky Derby. Kenny Troutt was born in Mr. Vernon, Illinois in 1948. He earned his Bachelor of Arts and Science Degree at Southern Illinois University while working as an insurance salesman. Troutt and his wife Lisa live in Dallas, Texas and have three children.