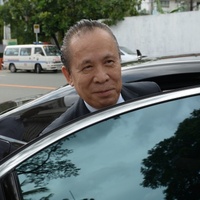 Kazuo Okada Net Worth: Kazuo Okada is a Japanese businessman who has a net worth of $1.5 billion. One of the richest and most affluent people in Japan, Kazuo Okada runs Universal Entertainment, a maker of pachinko machines that was formerly known as Aruze. Nowadays, he is involved in several lawsuits with Wynn Resorts, an American casino group managed by U.S. billionaire Steve Wynn, with properties in Las Vegas, Macau. Okada, who assisted the launch of Wynn Resorts with a $260 million investment, held a 20% stake in the company through his Universal Entertainment. But after Okada faced a lawsuit for breach of fiduciary duty, he filed counterclaim against Steve Wynn and other board members to prevent the "unjust" redemption of shares. In February 2013, Mr. Okada resigned his board seat ahead of a shareholder vote to oust him. Having teamed up with the property company owned by Philippine's billionaire John Gokongwei on a Manila casino, Kazuo is also under investigation in the Philippines for supposedly making improper payments to gambling regulators. Okada is currently in talks with U.S. regulators to settle the issue.