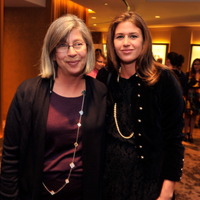 Karen Pritzker net worth: Karen Pritzker is an American businesswoman and philanthropist who has a net worth of $4.2 billion dollars which makes her one of the richest people in Connecticut. Currently based in Branford, Connecticut, Karen Pritzker is a member of the very wealthy Pritzker family. Her grandfather, A.N. Pritzker founded Marmon, a massive industrial company, and launched the Hyatt chain of hotels. Unlike the rest of her family, Ms. Pritzker chose to hold on to her shares in the family business, and, along with her husband, a career investor, she maintains large holdings in Hyatt, and has purchased a portion of Apple. She and her husband gave $3 million to her husband's brother, in order for him to develop a new drug to prevent infection. They subsequently licensed the drug to SanofiAventis for $375 million, the majority of which went to Pritzker and her husband as majority stakeholders. The also have holdings in a restaurant chain and a surfboard manufacturer, and run their own venture capital firm called, LaunchCapital, LLC.