K. Dinesh Net Worth: K. Dinesh is an Indian businessman who has a net worth of $1 billion. Mr. Dinesh is one of the co-founders of Infosys, an Indian multinational provider of business consulting, technology, engineering and outsourcing services. Headquartered in Bangalore, Karnataka, it's the third-largest India-based IT services (by revenues) and the second largest employer of H-1B visa professionals in the United States.

In 2011 he stepped down from the company's board, but he still holds shares in the company. Actually, it was a 30% rise in the company's shares that made him regain his billionaire status after dropping losing it in 2013. Mostly dedicated to giving nowadays, he and his wife Asha funded an organ transplant institute and mobile cardiac diagnostic labs. Also, they have plans to donate some ancestral property in Mysore for a new clinic meant for the poor. 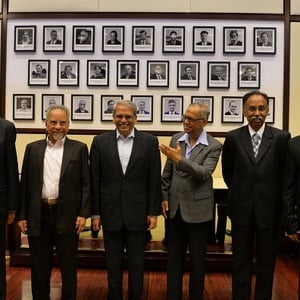