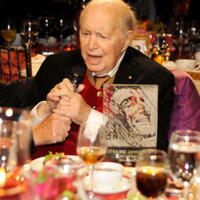 John Kluge Net Worth: John Kluge was a German-born American entrepreneur who had a net worth of $6.5 billion dollars. Born September 21, 1914 in Chemnitz, Germany, John Kluge is best known as a television industry mogul in the U.S. In the mid-fifties, Kluge purchased stock in the Metropolitan Broadcasting Corporation, the successor of the DuMont Television Network, which spun off from DuMont Laboratories after the television network ceased operations in 1956. Kluge began the company's expansion further into broadcasting in 1959, with holdings in television and radio. In the early '60s, Kluge bought an outdoor advertising firm and in 1961 the company's name was changed to Metromedia to reflect the diversity of its interests. In 1986, Kluge sold the Metromedia television stations to the 20th Century Fox film studio, which is now controlled by the News Corporation, for a reported USD $4 billion. Those stations would later form the core of what would become the Fox television network. The following year, Forbes Magazine placed Kluge at the top of its list as the richest man in America. On the philanthropic side of things, Kluge donated an unprecedented $60 million to create the John W. Kluge Center at the Library of Congress in celebration of the 200th Anniversary of the Library of Congress. In addition, his gift would establish a $1 million prize to be given in recognition of a lifetime of achievement in human sciences, comparable to the Nobel Prizes in literature and economics. The Kluge Prize would honor lifetime intellectual achievement in the same way as the Kennedy Center Honors recognize lifetime achievement in the performing arts. Kluge has also donated over $510 million to Columbia University. In 2001, Kluge donated his 7,378-acre (29.86 km2) estate in Albemarle County, Virginia to the University of Virginia. The estate, valued in excess of $45 million, was the largest gift in the University's history. John Kluge died on September 8, 2010, Charlottesville, VA.