The son of Greek immigrants, he was born on September 7, 1948 in Nisyros, Greece but he spent his entire life in the United States after moving with his parents when he was just six months old. While earning a degree in electrical engineering from New York University, he worked nights as a cashier at a grocery. In 1969 he opened his own store that later became the Red Apple Group empire. Today, the group controls New York's Gristedes supermarkets and 800,000 square feet of city real estate. It also holdings in aviation and real estate interests in New York, Florida, and the US Virgin Islands. Serving as the chairman and CEO of the Red Apple Group subsidiary United Refining Company, Catsimatidis also owns the Hellenic Times, a Greek-American newspaper based in Manhattan. Aside from his business, he tried his hand at politics as a Republican candidate in the 2013 New York City primary mayoral election. John has been married to Margo Vonderstaar Catsimatidis since 1988. They have two children together. His daughter Andrea Catsimatidis is a self-described "billionaire heiress instagram star" who also is an active member of the Republican party. 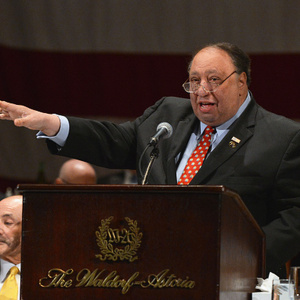