How much is Jim Irsay Worth?

Jim Irsay net worth: Jim Irsay is an American businessman who has a net worth of $2.7 billion dollars. Born in Lincolnwood, Illinois, Jim Irsay, graduated from Southern Methodist University with a degree in Broadcast Journalism in the early 80s. His father, Robert Irsay, purchased the Baltimore Colts while he was in elementary school, and he began working in the team offices just after graduating from college. Two years later, he was promoted to Vice President and General Manager, just as the team made the move to Indianapolis. In 1995, as his father's health was failing, he became Senior Vice President and General Manager. One year later, he became Chief Operating Officer of the Baltimore Colts. After his father passed away, he and his stepmother fought for control of the Colts. He eventually won, and, at age 37, became the youngest team owner and CEO in the NFL. In recent years, Jim Irsay has been struggling with addiction. In March of 2014, Irsay was arrested and charged with a DWI and 4 felony counts of possession of a controlled substance. Police reported that at the time of the arrest Isray failed to pass several roadside field sobriety tests, and they found several pill bottles with Schedule IV prescription drugs in the car. Isray married Meg Coyle in 1980, and the couple has three daughters, Carlie, Casey, and Kalen. Known for often quoting rock music, he also owns Jack Kerouac's original manuscript for "On the Road", for which he paid $2.43 million. He has also purchased guitars owned by Elvis Presley, John Lennon, Paul McCartney, George Harrison, Jerry Garcia, Bob Dylan, and Prince and a drum set owned by Ringo Starr. 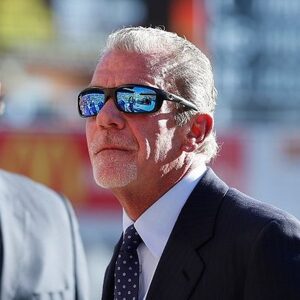