How much is Jay Y. Lee Worth?

Jay Y. Lee net worth: Jay Y. Lee is a South Korean billionaire who has a net worth of $7 billion. Jay Y. Lee is the grandson of Samsung founder Lee Byung-chull, as well as the oldest child of current chairman Lee Kun-hee. Jay Y. Lee currently serves as Samsung's Vice Chairman. He got closer to the key leadership position at the world's largest maker of memory chips, mobile phones and TVs in 2012. Lee who has been the President of Samsung Electronics since 2009, gets the credit for exponential growth in Samsung's smartphone and TV business. He has been dedicated to building Samsung's relationships with suppliers and other companies it does business with, while his reclusive father focused his attention to mapping out big picture strategy for the group. As a result, Samsung's Galaxy S III surpassed iPhone 4S as the world's most popular smartphone in 2012. But contrary to company's progress, Lee family is in the middle of lawsuits filed by some family members who are claiming bigger inheritance from the estate of the Samsung founder. Even though he is known for avoiding media exposure and keeping a low profile, Lee attended Steve Jobs' memorial service in 2011. 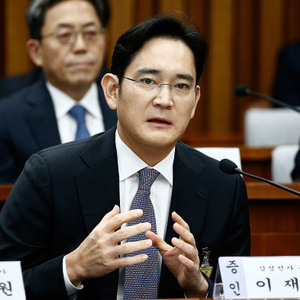