Jassim Al-Kharafi net worth: Jassim Al-Kharafi is a Kuwaiti billionaire who has a net worth of $1.2 billion. Belonging to a famously wealthy family, Jassim Al-Kharafi, along with six other siblings, inherited the Kharafi Group from their father Mohammed. However, he preferred to pursue a political career rather than indulge himself in the family business, which was run by his brother Nasser until his death in April 2011. Ever since Jassim's brother Fawzi took over the group, which has major stakes in many Kuwaiti companies like National Bank of Kuwait and telecommunication company Zain. Jassim Al-Kharafi, on the other side, has spent 38 years at the National Assembly, where he served as speaker from 1999 to 2011. In October the same year, he was given the title "Honoris Causa" by the University of Tirana. Thanks to his political endeavors and hist stake in the one of the Middle East's biggest holding companies, Jassim Al-Kharafi, along with his brothers Fawzi and Mohannad, is listed as the richest man in Kuwait as of March 2013. 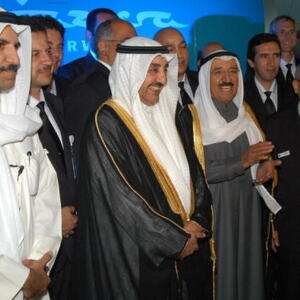