James Simons net worth: James Simons is an American mathematician, hedge fund manager, and philanthropist who has a net worth of $22 billion. James Simons earned his net worth as a hedge fund manager. He is most famous being the CEO and founder of Renaissance Technologies. He also holds a position as trustee for Brookhaven National Laboratory, the Institute for Advanced Study at Rockefeller University, Mathematical Research Institute in Berkeley, and is a member of the board at MIT Corporation.

James Harris Simons was born in Newton, Massachusetts in 1938. He graduated from the Massachusetts Institute of Technology in 1958 and received a Ph.D. in mathematics from the University of California, Berkeley in 1961. Simons was a code breaker for the National Security Agency and is an expert in pattern recognition, which made him a pioneer of financial signal processing. He taught math at Stony Brook University in Long Island, New York. He founded Renaissance Technologies in 1982. Renaissance is a private hedge fund investment company that manages more than $15 billion. At the end of 2009 he stepped down as the company's CEO. He remained on as Renaissance's nonexecutive chairman. Simons rarely gives interviews. He founded Math for America in 2004. He is married to Marilyn Hawrys Simons and has fathered five children. He and his wife co-founded the Simons Foundation and established Avalon Park in Stony Brook. He has given $25 million to Stony Brook University and $60 million to found the Simons Center for Geometry and Physics.

Net Worth details: Jim Simons has made most of his money through Renaissance Technologies' Medallion fund, which he has collected at least $9.5 billion from over the years. He owns about $1.4 billion of the $9 billion the fund manages. Simons has been credited with owning nearly 25 percent of the company, valued at about $2.8 billion total. He founded the New York based hedge fund and Medallion has returned an average of over 40 percent since 1988. 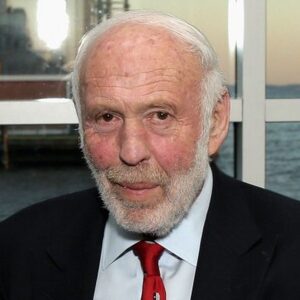