James Packer net worth: James Packer is an Australian businessman who has a net worth of $3.7 billion dollars. James Packer is the current head of Consolidated Press Holdings Limited, a media investment company that he inherited from his father. Since he took over the company in 2005, he has shifted its focus to the creation of a gaming and gambling empire. James Douglas packer was born in Sydney, Australia in September 1967.

He is the son of media mogul Kerry Packer and the grandson of Frank Packer. Packer is the chairperson of Crown Limited which is one of Australia's biggest entertainment and resort groups. Crown Limited's market capitalization was over $11 billion as of 2014. The company's resorts attract over 25 million people per year. He holds a 33.7% equity interest in Melco-Crow, a Macau based gaming group. The company operates resorts in the Philippines. Packer was executive chairman of Publishing and Broadcasting Group, as well as Consolidated Media Holdings. He has said that SEEK, an online classified site, was his "favourite company of anything I ever owned". Packer has made the Forbes Australia's 40 Richest list as #1 in 2006, 2007, and 2009 and remains in the top three. He was married to models Johdi Meares and Erica Baxter. Packer became friends with Tom Cruise and for a time was involved with the Church of Scientology in Australia. James was involved in a public brawl with longtime friend David Gyngell in 2014. In January 2016, Packer became engaged to pop singer Mariah Carey. 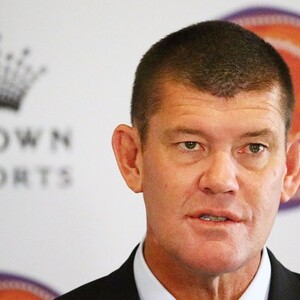