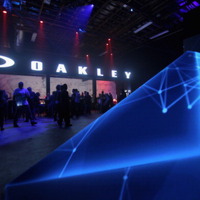 James Jannard net worth: James Jannard is an American businessman and designer who has a net worth of $3.1 billion dollars. That net worth makes Jim one of the richest people in Washington. Currently based in San Juan Islands, Washington, James Jannard founded Oakley in 1975. The company was originally devoted to selling rubber grips for BMX bikes and motorcycles. He launched the company from the trunk of his car. Nine years later, he began making sunglasses.

The company rose to prominence after he convinced popular BMX and Motocross stars to wear his lenses. Oakley went public in the mid-90s, and subsequently began to manufacture related items, such as goggles, clothing, and shoes. In 2007 Jannard sold Oakley to Italian company, Luxxotica for $2.1 billion. He did not sell 100% of the company. He reportedly maintains a significant stake and continues to earn dividends from Oakley's profits.

In 2005 Jim Jannard founded the digital camera company, RED.  RED has gone on to become a very successful camera company, with its cameras being used to shoot such feature productions as "The Social Network", "The Girl with the Dragon Tattoo", and "The Hobbit", among many others. In 2010, RED acquired a studio in Hollywood called Ren-Mar and renamed it RED Studios Hollywood.

Jim Jannard Real Estate Portfolio: In addition to his home in Washington, Jim Jannard also owns a palatial mansion in Malibu, California which he purchased in 2013 for $74.5 million. This property was actually a holdover from the late Herbalife founder Mark Hughes. For many years this was the record for most expensive home ever sold in Malibu. That record has since been broken with a handful of $100+ million sales. Jim owns another Malibu home, an 11-acre ranch-style property, which he bought the same year for $2.5 million. His primary residence is a 9-acre waterfront estate on Orca Island in Washington. He also owns the entirety of a nearby island called Spieden Island which was acquired in 1997 for $22 million. He owns not one but TWO islands in Fiji, where he reportedly plans to develop eco-friendly resorts.

Other properties in the Jannard portfolio include a mansion in Newport Coast, California, a 14,000 square-foot home in Las Vegas which was purchased in 2008 for $11.5 million and two properties in Beverly Hills which were acquired for $5.2 and $19.9 million, respectively.