James France Net Worth: James France is an American business executive who has a net worth of $2.1 billion. James France was born October 24, 1944. He is best known as the vice chairman of the board of directors and executive vice president of NASCAR and the former CEO of International Speedway Corporation.

James France and his family own 100% of NASCAR, the stock car racing business founded by his father, William Henry Getty France, who passed away in 1992. A bump in sponsorship revenue in 2013, most welcome after a recession-induced slump in recent years, makes NASCAR a reported $300-million-a-year business. Along with his brother Bill France, Jr., James France inherited control of NASCAR and ISC upon his father's death in 1992, as well as a membership, and for a time secretary, of the board of directors of NASCAR, he served influentially as an advisor to his brother through the latter's retirement as NASCAR president in 2000 and as NASCAR CEO and chairman of the board in 2004. In 1999, France founded the Grand American Road Racing Association, a sanctioning body for various forms of road racing in North America; including the Rolex Sports Car Series, the successor to the United States Road Racing Championship and the sponsor of the 24 Hours of Daytona; the Koni Challenge Series, a two-class touring car league; the SunTrust Moto-ST Series, an endurance racing motorcycle series. The Association also operates the North American arm of the international Ferrari Challenge. Forbes reported in 2014 that revenues were poised to grow again in 2015 when multi-year television deals with Fox and NBC totaling $6.8 billion kick in. France also owns more than 13 million shares in International Speedway Corporation, which manages many of the racetracks that hold NASCAR events. 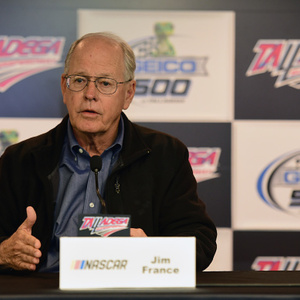