Before entering the business world, he served as a F6F Hellcat fighter from the decks of the USS Essex and the USS Enterprise, during WWII. He is noted for large charitable gifts like a $30 million gift to the Missouri Botanical Garden, and a $40 million challenge gift to the St. Louis Symphony Orchestra.

Jack Crawford Taylor was born in St. Louis, Missouri. Taylor attended Washington University in St. Louis starting in 1940 but he dropped out to join the U.S. Navy where he was a well decorated pilot, earning two Distinguished Flying Crosses as well as the Navy Air Medal. After the war, Jack took a job with a local Cadillac dealership in St. Louis, eventually becoming sales manager. In 1957, in cooperation with the dealership, Jack Taylor started a leasing business that targeted customers who had cars in the shop. Taylor called this company Executive Leasing Company. Taylor expanded outside of St. Louis in 1969 and changed the name of the company to Enterprise after the USS Enterprise aircraft carrier he had served on during World War II. Instead of focusing on travelers at airports, Taylor instead concentrated on the local market. In 1989, Jack changed the name of the company to Enterprise Rent-A-Car. By 1992, the company had over $1 billion in revenues, and by 1995, over $2 billion. In 2007, Enterprise purchased National Car Rental and Alamo Rent-A-Car. Jack Taylor died on July 2, 2016 at the age of 94. 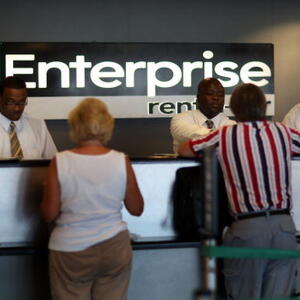