Ilkka Herlin Net Worth: Ilkka Herlin is a Finnish businessman and entrepreneur who has a net worth of $1.2 billion. Ilkka Herlin is Chairman of the Board and a major shareholder of Cargotec Oy. He is the son of former KONE Corporation CEO Pekka Herlin. Herlin holds a Ph.D.

degree. He is a founding member and Chairman of the Board of the Foundation for a Living Baltic Sea, a Baltic Sea action group. Ilkka is the great grandson of Herald Herlin who purchased the Kone Corporation in 1924. Kone is a world leader in elevator and escalator production. In 2013 the company had $9.5 billion in sales. When his father passed away in 2003 Irkka inherited just over 3% of Kone and 10% of Cargotec. Ilkka and his two brothers sued for a larger stake after finding out that the majority of the family's ownership in Kone Corporation went to the oldest brother Antti who is the former CEO and current chairman. In 2005 the dispute was resolved with Antti maintaining control and an ownership stake in Kone while the other siblings would get a majority stake in Cargotec and a minority stake in Kone. 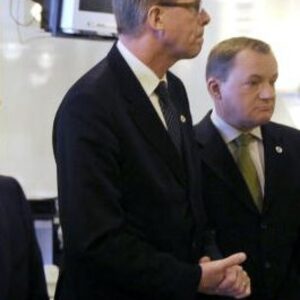