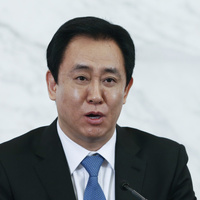 Hui Ka Yan net worth: Hui Ka Yan, also known as Xu Jiayin, is a Chinese property developer who has a net worth of $7 billion. Hui Ka Yan is the Chairman of one of the biggest developers Guangdong Province, Evergrande Real Estate Group. As a result, Hui Ka Yan is one of the richest people in China.

Between January and June 2017, Hui Ka Yan's net worth increased $10 billion. Just a few years ago his net worth was roughly $7 billion. At one point it topped $33 billion. Among Evergrande's current projects more notable are Evergreen Oasis Wuhai in arid Inner Mongolia, and Evergreen Spring City Enping in Guangdong. Also, Evergrande had a similar destiny to fellow rich lister Chu Lam Yiu's Huabao International, both being attacked by overseas short sellers in 2012. Luckily, Evergrande's shares recovered afterward. Apart from his real estate business, Hui Ka Yan owns a soccer team and movie production company. As for his private life, he is married with two children.