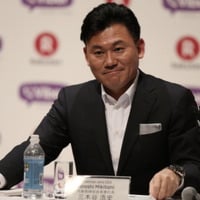 Hiroshi Mikitani net worth: Hiroshi Mikitani is a Japanese businessman who has a net worth of $9 billion. Hiroshi Mikitani is the chairman and CEO of Japan's biggest e-retailer, Rakuten, which he founded in 1997. Two years later the company changed its name into Rakuten, Inc. Ever since, Mikitani has worked on acquiring companies that will grow his global offerings and challenge behemoths like eBay and Amazon. More precisely, Mikitani has spent over $1 billion throughout the past few years obtaining Buy.com in the U.S., Play.com in the U.K., among many others. In March 2010, he implemented a project called "Englishnization", gradually making English the language of Rakuten, despite the fact that its staff is mainly Japanese. He decided to make this change because he believes, "English is not an advantage anymore – it is a requirement." Furthermore, he took a $100 million stake in photo-sharing site Pinterest in May 2012, as well as Canada's e-book reader company Kobo earlier that year. Among Mikitani's major titles also are included director of Kobo Inc., chairman of Rakuten Card Co., Ltd, chairman of Rakuten Travel, Inc., chairman of Fusion Communications Corporation, as well as chairman of Crimson Football Club, Inc. Apart from his business duties, he has also some family responsibilities, being married with one children.