Herb Simon net worth: Herb Simon is an American real estate tycoon and sports team investor who has a net worth of $2.4 billion. Herb Simon is the owner of the NBA's Indiana Pacers. Herb Simon was born in New York City in 1934. He grew up in Williamsburg, Brooklyn, and attended the City College of New York.

Herb and his brother Mel Simon founded the Simon Property Group, which is the largest real estate investment trust in the United States. Mel Simon died in 2009 and today Herb Simon is chairman emeritus of the Simon Property Group. The company primarily develops shopping malls and the Premium Outlet Centers. In 1983, Herb and his brother Mel purchased the Indiana Pacers of the National Basketball League. Herb Simon also owns the WNBA's Indiana Fever. In 2010, Herb Simon purchased Kirkus Reviews, the American book review magazine founded in 1933. Herb Simon has been married three times and has ten children. In 2002, he married Porntip Bui Nakhirunkanok, the former Miss Thailand who was also Miss Universe 1988. The couple have two biological children and adopted Porntip Bui Simon's sister's three children when she died. Herb Simon also has two children from his first marriage and three children from his second marriage. 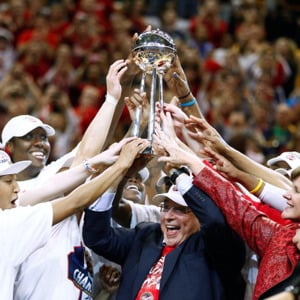