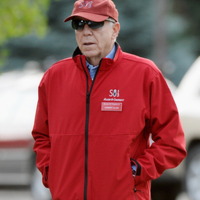 Herbert Allen, Jr. Net Worth: Herbert Allen, Jr. is an American entrepreneur who has a net worth of $2.5 million. Born Herbert "Herb" Antony Allen, Jr. in 1940, he chairs Allen & Co., an investment bank. Right after his graduation from Williams College, in 1962, Allen joined New York-based Allen & Co., which was founded as an investment partnership in 1922 by his father, Herbert Allen, Sr., and his uncles, Harold Allen and Charles Allen, Jr. Four years later, Allen was appointed President, and later, in 1973, the company bought a controlling stake in Columbia Pictures. A decade later, Allen sold Columbia Pictures to the Coca-Cola Company for $750 million, and a seat of Coke's Board which secured Allen a profitable spot on many Coke's following deals. In 2002, Allen handed over his CEO position to his son, Herbert A. Allen III, and since then, the company has had interests in high-profile tech companies, including Yelp, Google, Zillow, Facebook, Zynga, LinkedIn, and Groupon. Moreover, Allen & Co. holds an annual conference, called Camp Allen, in Sun Valley which brings the biggest names in media and technology industries.