Henry Nicholas, III. Net Worth: Henry Nicholas, III. is an American businessman and entrepreneur who has a net worth of $3.8 billion. Henry Nicholas is the co-founder and former co-chairman of the Board, President and CEO of Broadcom Corporation. He is also a philanthropist and staunch leader of the victim's rights movement. He was born Henry Thompson Nicholas III in 1959, in Cincinnati, Ohio. After his parents divorced, he moved with his mother to Santa Monica, California. After high school he enrolled at the U.S. Air Force Academy but dropped out after three years when it became clear that his height, he is 6 foot 6, would prevent him from ever being a pilot. After leaving the Air Force Academy he enrolled at UCLA where he eventually earned a degree in Electrical Engineering. He then went to acquire an MS and Ph.D. in Electrical Engineering from UCLA. After college, Henry joined business conglomerate TRW. It was at TRW where Henry Nicholas met Dr. Henry Samueli who would become his business partner later in life. Henry's next career stop was PairGen Technologies, where he served as the director of Microelectronics. It was in 1991 that he left his post at PairGen to co-found Broadcom Corporation with Samueli. They both invested $5,000 to launch the compant. The business partners took their semiconductor company public in 1998, after which it grew into an electronic manufacturing powerhouse. In no time it has reached $1 billion in annual revenue, which is a faster rise than any US semiconductor company in history. By 2011, the company's revenues reached $7.4 billion. Nicholas focused on philanthropy and founded the Nicholas Academic Centers which have allowed over 230 students to study at top-ranked universities across the nation. Also, he supports Episcopal community causes and the arts through his Henry T. Nicholas Foundation.

Controversies: Henry Nicholas famously spent more than $30 million renovating his house in Southern California. The final version of the house featured an underground man cave that some has described as a private sex dungeon. When neighbors complained about the construction, Nicholas moved his dungeon to a warehouse nearby. The warehouse lair was soon given the name "The Ponderosa" or "The Pond" as regulars came to call it. Visitors entered through a secret passageway that opened up to a large room decorated in red and gold. Nicholas allegedly supplied visitors with copious amounts of drugs and prostitutes. His wife soon filed for divorce and government prosecutors filed indicted him on securities fraud. Those charges were eventually dismissed. In August 2018, Henry Nicholas was arrested in Las Vegas after hotel security found an unconscious woman in his room with a suitcase full of drugs. 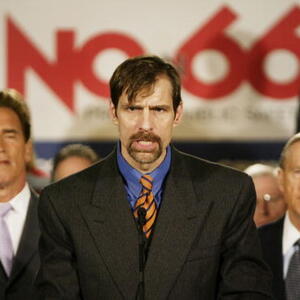