Harry Triguboff net worth: Harry Triguboff is an Australian property developer who has a net worth of $6 billion. Commonly known as "High-Rise Harry", Mr. Triguboff is the Managing Director and Chairman of the Meriton Apartments Pty Ltd. Born in China, Harry was educated at the Scots College in Sydney, and then at the University of Leeds in England, where he earned his degree in textile.

However, his education didn't help him much when he got back to Australia in 1960, and thus did several odd jobs including driving a taxi and owning a milk round in Chatswood. He rose to prominence after he built a block of 8 units at Tempe in Smith Street in 1963, and then buiding18 more at Meriton Street in 1968. The latter block of apartments provided the name of the company "Meriton Apartments," which he registered in 1968. Ever since, Triguboff's company has developed into Australia's biggest home-builder, having built 60,000 residential dwellings, mainly townhouses and apartments. Among the most notable projects of the company is the construction of Sydney's tallest residential apartment building World Tower (2001-2004). As of May 2011, the Business Review Weekly magazine estimated Triguboff's net worth at $4.30 billion AUD, making him the seventh richest person in Australia. Also, he was the first person to win Australia's Property Person of the Year award twice (once in 2003 and then again in 2009). As for his personal life, he has been married twice and has two daughters from his first marriage. He is still with his second wife, and they currently live in Sydney. 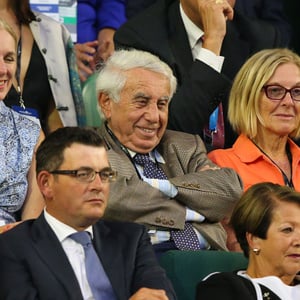