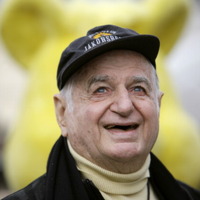 Hans Riegel Net Worth: Hans Riegel was a German entrepreneur who had a net worth of $2.9 billion. Hans Riegel is the Gummy Bear billionaire, or in other words he has accumulated his fortune as owner and leader of the confectioner Haribo. Maybe it's not so obvious, but the name is an acronym for Hans Riegel, Bonn. Born Johannes Peter Riegel on March 10, 1923 in Bonn, Germany, he was raised as the oldest son of the inventor of the gummy bear and the company's founder Hans Riegel, Sr. Founded in 1922, the company has gradually expanded by taking numerous local sweet manufacturers in countries all over the world. The business grew despite the weak economy in Europe and the unfortunate happenings on the political scene. Nowadays, Haribo is one of the biggest manufacturers of gummy and jelly sweets, and is credited for the invention of more than 200 sweets, including Gummy Bears, Vademecum sugar-free gum and Maoam fruit chewies among other jelly sweets and liquorice. Hans Riegel and his brother Paul restored the company after World War II and managed it together until Paul's death in 2009. Each of the brothers had a 50% stake in the business. But since Hans died single with no children, the entire company now is owned by Paul and his heirs. Paul's son Hans Guido Riegel runs the production and technical questions, while his two other sons of Paul, Hans Juergen Riegel and Hans Arndt Riegel, sit on the supervisory board.