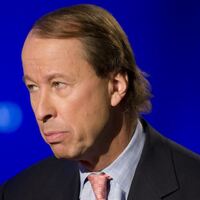 Hamilton "Tony" James Net Worth: Tony James is an American financial entrepreneur who has a net worth of $1.72 billion. Hamilton "Tony" James earned his fortune thanks to his work with The Blackstone Group, where he currently serves as executive vice chairman. The Blackstone Group is an American multinational private equity shop with more than $500 billion in assets under management. Blackstone also ranks as the biggest owner of single-family homes in the States, with more than 31,000 houses.

Together with Stephen Schwarzman and Jonathan Gray, Tony benefited greatly when the company went public in 2007. This event solidified Tony's billionaire status. Prior to becoming a key person at Blackstone, he eanred a BA and MBA from Harvard in mid-1970s and then worked at investment bank Donaldson, Lufkin & Jenrette for some 25 years. Next, he held the position of chairman of investment banking and private equity at Credit Suisse First Boston. He joined Blackstone in 2002.

Tony James is a trustee with several environmental nonprofits like the Wildlife Conservation Society and The Second Stage Theatre and The Metropolitan Museum of Art.

In 2011 Tony paid $25 million for an apartment on NYC's Fifth Avenue. He has been married to Amabel George Boyce since 1973. They have three children together.