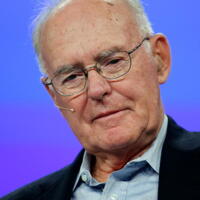 Gordon Moore co-founded the Intel Corporations and serves as Chairman Emerits, and has a net worth of $7.1 billion. Gordon Moore earned his net worth through his many positions in the business world, and author of Moore's Law, which was published in the April issue of Electronics Magazine in 1965. He was born in San Francisco, California U.S.

In addition to his net worth, he has a kind of name recognition that few in the computer business earn, mostly due to his work on Moore's Law. Moore's Law states that the computing power and miniaturization of computers doubles roughly every two years (meaning computers get twice as small and powerful about every two years). This idea was first published in 1965 in an issue of Electronics Magazine, and has proved to be an uncannily accurate prediction in the years since. Intel Corporation was founded in 1968 along with Bob Noyce. Since then, Intel has become a trusted and popular brand as computers have gotten more and more popular thanks to personal computing brought on by companies such as Apple and Microsoft. Outside of computers, Moore has a varied amount of hobbies; including a lifelong love of fishing which is said to be the motivating factor behind is efforts in the field of environmental conservation. Other hobbies of Moore include car painting and making small model airplanes.