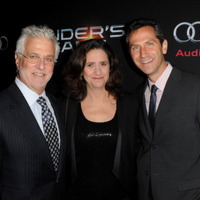 Jean (Gigi) Pritzker Net Worth: Jean (Gigi) Pritzker is an American heiress and filmmaker who has a net worth of $2.5 billion. Born Jean "Gigi" Pritzker in 1962, Illinois, she came into riches as a member of Chicago's famous Pritzker family. Her grandfather Abram Nickolas Pritzker, professionally known as A.N. Pritzker, co-founded Marmon Industrial corporation and Hyatt Hotel chain together with his sons Jay, Gigi's father, Donald and Robert. In 2007, Pritzker clan sold Marmon's controlling stake for approximately $4.5 billion to Berkshire Hathaway owned by fellow billionaire Warren Buffett. A graduate of Stanford University, Gigi and her friend Deborah Del started a small film production company, Odd Lot Entertainment. It was shortly after she finished her courses in documentary film making. In 2010, the film company released the movie Rabbit Hole starring Nicole Kidman, and the next year, it produced Drive starring Ryan Gosling. Last November, Odd Lot launched its biggest movie Ender's Game with Harrison Ford that allegedly costs $110 million. In addition to her fortune, Gigi and Ted Rawlins own Relevant Theatricals, a live stage production company, and together with her brother Thomas, she purchased TMS International Corp., a steel company, for $1 billion. Moreover, Gigi and her husband Michael Pucker have founded the Pritzker Pucker Family Foundation and the Chicago Children's Theatre.