Gerald Cavendish Grosvenor was the richest person in Britain thanks to a family trust that dates back to the 17th century. Educated at Harrow School and RMA Sandhurst, in 2005 he was elected Chancellor of the University of Chester. Through Grosvenor Estates, the Duke was the richest property developer in the United Kingdom and one of the country's largest landowners, owning vast estates in Oxford, Cheshire and Scotland as well as large areas of Mayfair and Belgravia in central London, and elsewhere in Europe. Grosvenor served in the British Army between 1973-2012, reaching the rank of Major-General and receiving many military awards. As a child. the Duke lived on an island in the middle of Lough Erne in Northern Ireland, where he was educated before attending Sunningdale School and Harrow School in the United Kingdom. As the 6th Duke of Westminster, he married Natalia Ayesha Phillips, the daughter of Lt Col. Harold Pedro Joseph Phillips and his wife Georgina Wernher, in 1978. Natalia is a direct descendant of famed Russian poet Alexander S. Pushkin and therefore of his African ancestor Ibrahim Hannibal as well as King George II, placing her distantly in line to the British throne. The Duke and Duchess had four children: Lady Tamara Katherine Grosvenor (1979); Lady Edwina Louise Grosvenor (1981) (she is a goddaughter of Princess Diana); Hugh Richard Louis Grosvenor, Earl Grosvenor (1991), Lady Viola Georgina Grosvenor (1992). Gerald Cavendish Grosvenor died on August 9, 2016. 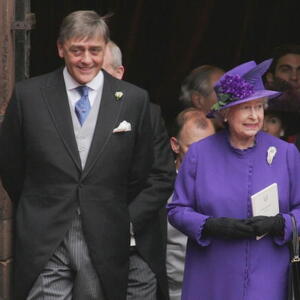